Oh! So that's where those tunes originated from.

Yellowjackets Samurai Samba was frequently heard from Jim's office. I admit I enjoyed the jazz music, but I never put a name to it. Now I have the name forever - Yellowjackets! 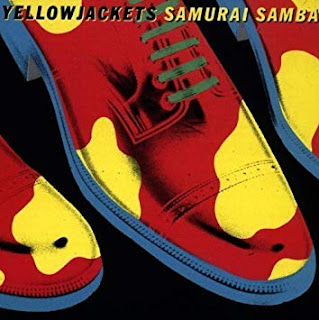 The 1985 album was produced by Tommy LiPuma and Yellowjackets, with:

The jazz fusion band steps back to 1977 when guitarist Robben Ford was recording his first album.  He recruited to join him keyboardist Russell Ferrante, base guitarist Jimmy Haslip and drummer Ricky Lawson. The name Yellowjackets was selected by producer Tommy LiPuma from a list of suggestions from band members.

The band has recorded close to 30 albums,been nominate for numerous awards, and evolved into its own jazz sound.  Check out the band's itinerary for a concert or workshop you don't want to miss.

Listen  to Yellowjackets Samurai Samba and more at its website, or take home some of its music from the amazon Buzz Store.
Posted by M. Fisher at 7:07 PM No comments: