The Further Adventures of Flim & the BB's 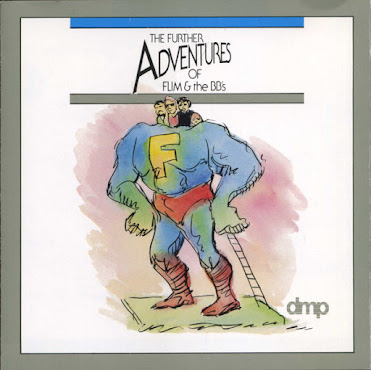 I LIKE the cover art for The Further Adventures of Flim & the BB's. How could anyone not? A Superman-esque body  topped by the heads of Flim and the BB's. And that big F on his chest says it all.  This is an album to be reckoned with! And you do.
Starting with the very first track of On The Avenue, the music grabs you. Just imagine the Flim giant strolling down a busy street and all the havoc he would cause.  Jim used to play this on the drive into work.  It's now stuck in my head as I drive along. Listen and you will hear what I mean. Do do do, do do do do do.....  I especially like the saxophone.
Next on the jazz album, released in 1988 by Digital Music Products Inc. (DMP), is Ireland. The stiff beat combines a sing-songy flute solo which stands out. The jazzy Jazz Patrol comes next. I like the piano solo. Cute Shoes follows. I can almost imagine dancing in cute, shiny red shoes. Ya' wanna' dance? One for Hermeto, Pharaoh, Five on the Floor, Curveball and If You Only Knew   continue the musical extravaganza. (Yes.  I call it an extravaganza because the tunes are big sounding and wonderful!)
Bathing Beauties comes next.  I can just imagine them strutting and posing to the music. The Coast Is Clear, Rokeby Garden, and Over and Out bring the album to a close with more tight toe-tapping tunes.
Listening to this CD brought back many good memories of Jim and his music. I will always associate Flim and the BB's with Jim.  If you would like to know more about Flim and the BB's visit the Wikipedia site here.  Listen to the tunes here on YouTube. https://www.youtube.com/playlist?list=PL9FF80C1BCB2AB2A0
Flim and the BB's formed in the 1980s. The band included bassist Jimmy "Flim" Johnson, keyboard artist Billy Barber, percussionist Billy Berg  (the BB's), and reeds player Dick Oatts.
The band's TriCycle  made its appearance in 1982 at the beginning of the compact disc craze, and the BB's  were sought after by people first recording digital. Band members were happy to oblige, but not able to quit their day jobs. Listen to some of of the recordings. I'm sure you will enjoy Flim & the BB's.